Thank you for your interest in supporting Zulufadder!
By changing the life of just one child, you will be helping to change the lives of many, the effect of which will last for generations to come.

Anyone who has read Karen Blixen’s book, “Out Of Africa”, has formed a picture of what it looks like where she is. When you hear the word “Zulu” you also get pictures in your head. And these images may also correspond to reality. But only a SMALL part of reality. That is why it is so fascinating to actually EXPERIENCE what you have seen or heard about. I am starting to know South Africa and the Zulus quite well by now. But I am ALWAYS surprised by new things.

It’s been a long time since I’ve visited Zulufadder now. Of course due to Covid. Everybody is still using face masks in stores , at schools and during transportation. But one thing I was NOT surprised by was that Silvia and Nick have made sure everything went smoothly during this difficult time.

It was GREAT to come back to South Africa! At Gratton school, which is our biggest project, I was received like a queen: with singing and dancing by the students. And we are not talking “one, two, three to the side”. No, here were young people, first in school uniforms, then in Zulu costumes; with antelope leather and beads of all colors and shapes. And Zulu solo dancers. Mostly it is about kicking the highest with the right leg. The amazing thing is that EVERYONE gets a place; everyone dances a little solo dance and everyone cheers. 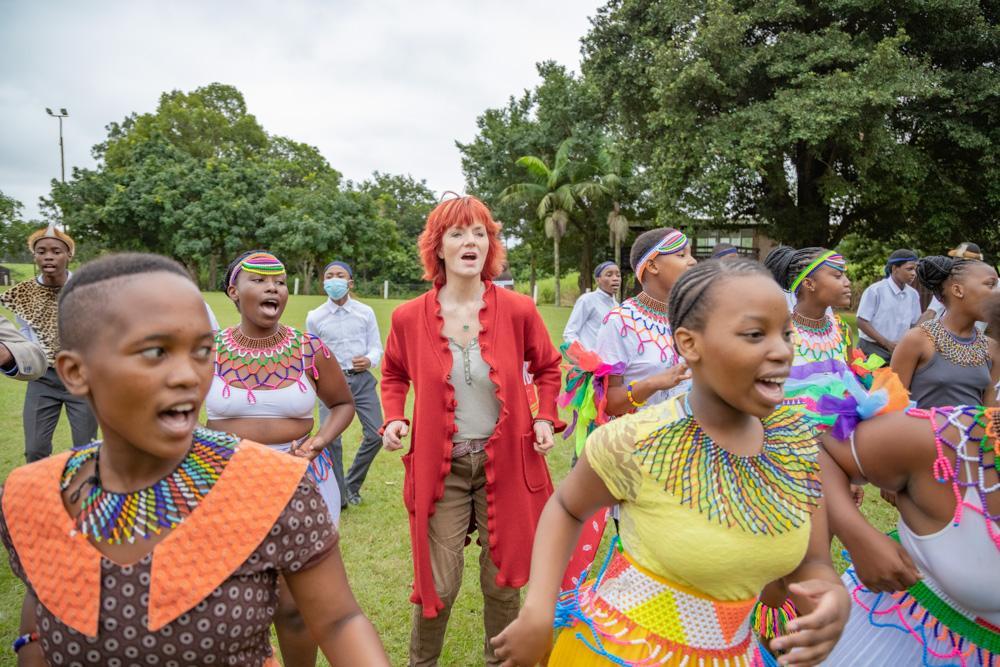 The Gratton preschool has moved into a newly renovated house from 1870 in a fantastic garden where the children can play. Incredibly beautiful. And had my head teacher been like teacher Joy, I would have never wanted to grow up.

One of our Zulufadder beneficiaries, Minenhle, has worked as an assistant at Gratton for several years and has been studying to become a teacher part-time. She has just received her Bachelor and has become a permanent teacher in the high school at Gratton. Congratulations!

We also visited the new, beautiful classrooms that we could not have been able to build without the help of our child sponsors, the kindergarten Læringsverkstedet and not least our main sponsor NutraQ. Hooray for everyone!!

The high school students participate each year in a school competition for entrepreneurial clubs. Very impressive. Everything from jams from Aloe Vera plants, growing their own vegetables, chicken and pig farms, to physics studies. The students have won several awards for the products they have made. We are very proud of this school, and I think all of you should be too, because it really is a great school!

I had a chat with the school principal, Mr Munyoro, see our conversation here:

Giving  gifts to our children is one of the most fun things I know in the whole world. I met maybe one of the world’s cutest 3-year-olds, she had a lovely laugh when she got a warm winter jacket and new shoes.

I also visited my former sponsor child who I have supported since 2005 until he finished his teacher training. He had become a super handsome young man who contributes to society. Hurray! It helps to help!

We had a visit from Tanya, a beautiful young doctor from Spain! She lived with the students at Zulufadder boarding house for the 10 days she was with us. With the help of our field workers, we were able to start a one-day clinic. Tanya had 30 patients that day, and she operated on a local woman with a very ugly wound on her leg. In no time the doctor had cleaned and cut and bandaged the wound, and when we visited the lady after a few days it looked much better already.

That same evening, Tanya arranged a dance competition at the boarding house. She was teaching salsa, I was teaching Norwegian folk dances, and the rest of the children were good Zulu dancers. INCREDIBLY fun cultural evening! 💃🏾

In the days ahead, we gave away clothing packages to large families. I had the suitcase full of clothes from friends in Norway and sponsors have given funds  to our Warm clothes and blanket fund. Thank you so much for all the contributions! It’s winter again – and Silvia finds those who need it most when we have funds to spend. 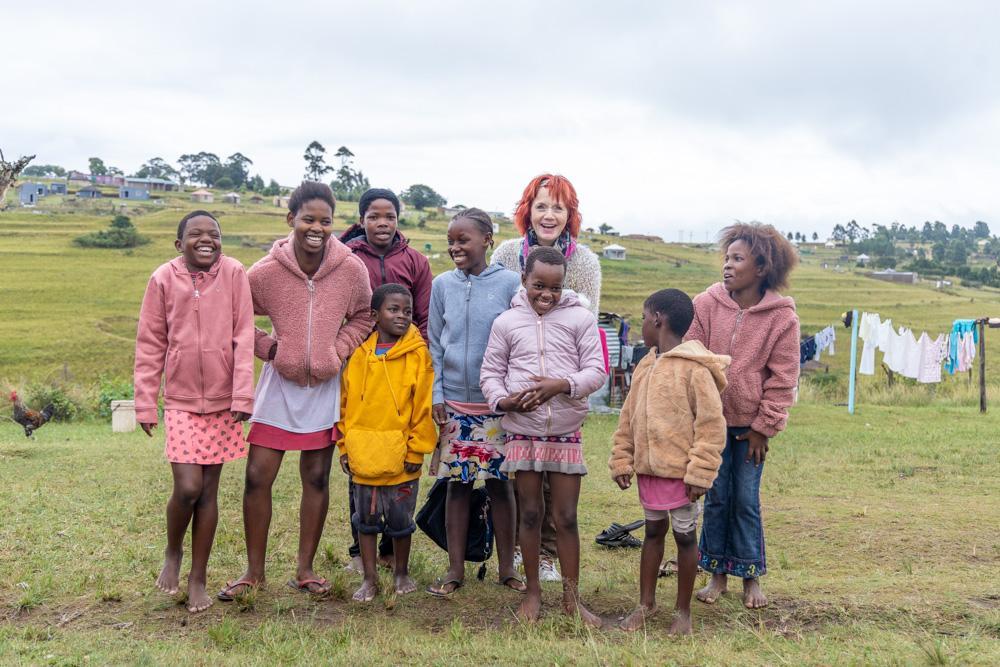 We visited a couple of the girls from school at home. We walked among many houses, water tanks and dogs and bricks and people waving and greeting. Some houses have thatched roofs, some tin roofs. Some are round and some are square. The homes here were tidy and clean. One girl lived only with gogo (all grandmothers are called “gogo” in Zulu) at 89 years old and a little sister at 11 years old. The house had two small rooms. They all slept in one room. We were very touched to see the care the two girls had for Grandma!

On the way home we drove past a church with loud singing and music. We know the priest there very well. It was a very long time since I had seen him . We stopped the car and I went to the open church door. When he spotted me, in the middle of the song, he ran down the aisle and gave me a proper teddy bear hug. The congregation thought it was completely natural and just sang on. I must admit that the songs there are very different from the ones we are used to during our church services in Norway. We do not dance SO much either…

Our excellent musical kindergarten, DOREMI, with Popi at the front, is a house full of charming children. And don’t miss Popi himself. That was where we started in 2005. The house was built by two guys from Fredrikstad and is the heart of Zulufadder. This is also where the good childhood of some lucky Zulu children begins. Here, English and Zulu alternate, songs, dances, toys, letters that become words and a large dose of love. 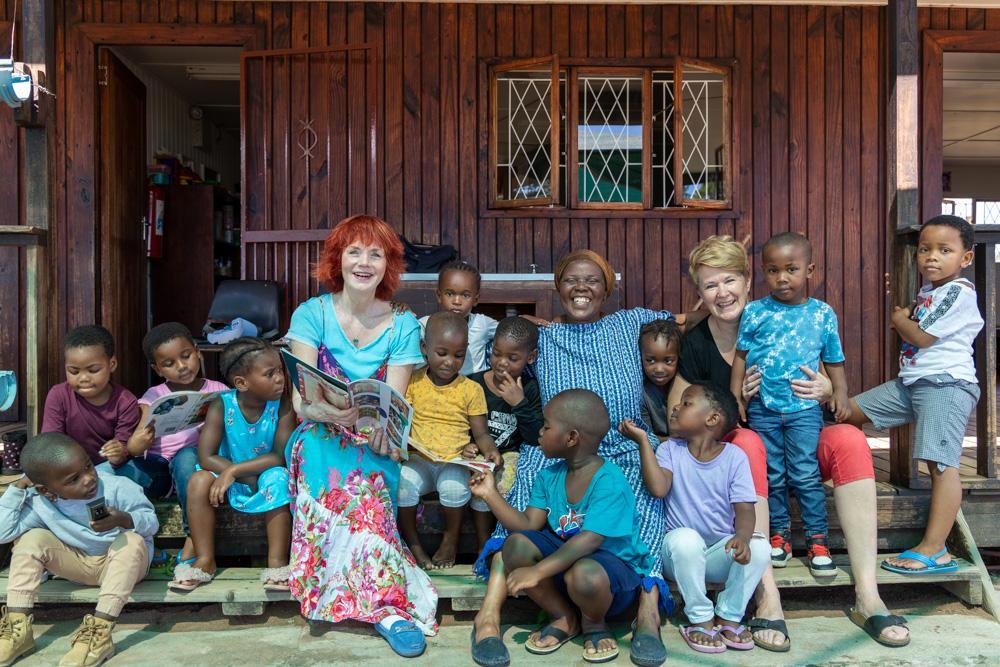 When the rain and storm came, which were also shown on international news, everything changed. It blew insanely and the rain whipped. Like standing inside the shower. Fortunately, Eshowe was right on the edge of the “eye”. But just a few miles south, disaster struck, and nearly 500 died and houses were smashed. Our driver was in a kilometer-long traffic jam due to damaged roads. The Gratton students, who were going home for the Easter holidays, Silvia and I had to drive home after four hours of waiting.

We were going to stop by with a gift on the way home. And then I was happy with my 4-wheel drive and experience from moose hunting, otherwise I would have been terrified. We had to go through deep mud and steep terrain, but Silvia from Northern Norway drove the Prado elegantly through and we arrived safely.

Suddenly the rain stopped and we witnessed something very special. Traditional Zulu celebration. The girls danced and sang with hats, animal skins, jewellery and belts with beads. We stopped to see and luckily Silvia knew that the tradition was to put a banknote in the hat of the main character. This cross between the traditional and modern use of mobile phones and camera lenses, fast cars and cows and goats, is fascinating. Culture and tradition at their best. It binds people together and makes them happy.

And then my journey was over. And I went back home. At least my body. But my thoughts remain in Zululand. For a long time.

Did you think about…